Today we are taking a look at a CPU cooler by Noctua – The NH-D15. Noctua is famed for its high-quality case fans but, Will this cooler live up to the hype and keep our machine cool?

Noctua has been around since 2005 and is world renown for silence, quality and class-leading performance.

Today, we have the pleasure of looking at the successor to Noctua’s NH D14; The all-new NH-D15 which, has had several tweaks and enhancements made to ensure it can compete with the best of the best CPU air coolers out there.

All in all this is a very impressive cooler on paper so let’s see how that translates into the real world shall we?

Improvements over the NH-D14

The NH-D15 by Noctua has brought with is some very welcome improvements over the previous generation;

I would like to thank Noctua for sending us the NH D15 for testing and review.

In the box, Noctua provided some NT-H1 Thermal Compound which, as you may know, ranks amongst some of the best in the world. The PWM support also allows you to either control the fan speed through your motherboard or limit them from 1500rpm to 1200rpm with the supplied Low-Noise adapters

The box is very simple and understated – just features the stand out specs for this cooler such as the 140mm NF-A15 fans, the low noise adapters and a promise to past and future socket compatibility (if technically possible)

The back of the box gives us all of the new and improved features that the NH-D15 has to offer such as the elevated fins to allow tall ram (in single fan mode), the SecuFirm2 mounting system and a huge 6-year warranty on the NF-A15 140mm fans.

The side shows us all the important specs of the heat sink and fans along with a dimension overview showing us just how big this monster is.

Inside we see that everything is in separate boxes and not little plastic bags as is the norm, This gives this cooler a premium feel even before you take it out of the box.

Here we have the mounting kits for both AMD and Intel as well as the accessories box.

Underneath we find the heat sink and second fan both enclosed in sturdy cardboard boxes and enclosed in foam, This is really nice packaging.

Each of the mounting kits have their own extensive manual for installation with the kit for AMD using the stock back plate it requires fewer parts.

This is what’s in the accessories box pictured earlier, We have the installation kit for the second NF-A15 fan, two low noise adaptors (7v, fully sleeved)), Noctua’s long reach screwdriver, a 2 into 1 PWM adaptor (fully sleeved) and an all-metal Noctua case badge which adds to the premium feel.

From the moment you take this heatsink out of the box you know that Noctua is not messing around.

This has 6 nickel-plated copper heat pipes between the two towers and we can see the cutouts to allow for high-profile ram if you only use a single fan, the heat sink itself feels very solid and you can drop the fan in the middle-low enough to allow for airflow over your motherboards vrms which is quite handy when you start overclocking.

There are no blemishes, dents or scratches at all on this heat sink all of which points to excellent quality control.

This is exactly the kind of mirror finish we all like to see on any cooler and massive kudos to Noctua for providing it.

Here are the NF-A15 fans in the almost famous brown and cream colour scheme but we can forgive them for that because of the performance they provide: 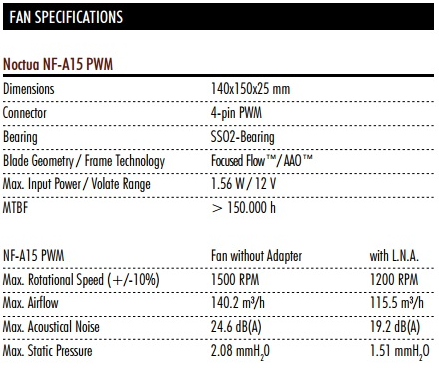 Pushing out 140 cubic metres of air per hour is quite impressive considering the noise levels only hit 24.6 dBa

Since this uses the stock AMD backplate mounting and installation needed prior to the heatsink is fairly straight forward, just a couple of screws to hold the brackets on and that’s it.

Then it’s just a case of using the long-handled screwdriver provided to secure the heatsink to the brackets.

And here we are fully mounted and assembled

I have to say that this is really quite an easy cooler to install, fairly straight forward with the only issues being the sheer size of the heatsink meaning it’s best if you lay your case on its side and remove the GPU to make it all go a bit smoother.

I’ll be testing this cooler using Asus ROG Realbench with various CPU clock speeds and with the fans set on standard and turbo, Ambient temperature is 23c.

Here are the clock speed and voltages used on this CPU to test out the cooler.

At the stock fan profile this cooler does very well to keep the temps down while remain near silent even at 4.8Ghz

With the turbo fan profile, we see a small drop in temps and this tells me that the cooler is already working at near peak efficiency.

These readings were recorded at 30cm away from the case and this is fairly impressive, hitting a max of 41 DBa in it’s Turbo profile.

The upsides to the NH-D15 are plenty, For its size, it’s easy to install, It oozes quality, provides great cooling and its noise levels are very very good.

The downsides are very few for me, the colour choice of the fans aren’t the most pretty out there (but there is no doubt they are Noctua’s) and that’s it.

Overall I am very impressed by the NH-D15, it’s a premium quality product that performs very well, looks great, is very quiet to run, has some very easy mounting options.

The NH-D15 is a premium quality CPU cooler that shows Noctua is still setting the bar for high-end air cooling. Its impressive performance dissipating heat combined with its quiet operation make this unit an awesome buy.